Iran Among the Ruins: Tehran's Advantage in a Turbulent Middle East

This article originally appeared in the March/April 2018 issue of Foreign Affairs. View it here. Over the last seven years, social upheavals and civil wars have torn apart the political order that had defined the Middle East ever since World War I. Once solid autocracies have fallen by the wayside, their state institutions battered and broken, and their national borders compromised. Syria and Yemen have descended into bloody civil wars worsened by foreign military interventio 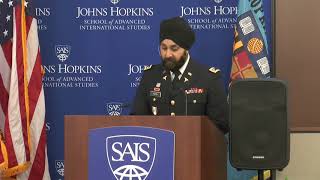 Diversity in the U.S. Military and the Contributions of the Sikh-American Community

Johns Hopkins SAIS was honored to host members of the Sikh-American community for a dialogue on diversity in the U.S. military, and the intersection of core values in Sikhism and military service. ​ To kick off the event, a documentary short film was shown detailing the struggles of Bhagat Singh Thind as one of the first Sikhs to serve in the U.S. Army. This was followed by a panel discussion on religious accommodation and the challenges to and opportunity for broader diversi

Foreign policy begins at home, and in Europe and the United States the domestic drivers of foreign policy are shifting in important ways. The election of Donald Trump as U.S. president, the decision of British voters to leave the European Union, and popular pressures on governments of all stripes and colors to deal with the domestic consequences of global flows of people, money and terror all highlight the need for greater understanding of such domestic currents and their res

The Iran Regime-Change Crew Is Back

This article was originally published by The Atlantic on April 25, 2018. View it here. "The Iran Regime-Change Crew Is Back. That probably spells doom for the nuclear deal." Among the most strident critics of the nuclear deal with Iran are those who believe it furthers the survival of its leadership. By throwing Iran’s rulers an economic lifeline, they believe, the deal is an abject failure. America’s goal, they say, should never have been “denuclearization,” but regime chang

The Foreign Policy Institute, Asia Programs, Muse District, & Indus hosted Kaleidoscope Pakistan, an exhibition of works by Naureen Bokhari, curated by Muse District.The photography exhibit and reception were hosted in association with Pakistan Beyond Seventy: The Long View, a conference hosted by Johns Hopkins SAIS Asia Programs & Lahore University of Management Sciences. The event was on the record and open to the media. ​Decades of war on terror and militancy in Pakistan h

Unpacking a US Decision to Engage North Korea: What it Entails and What it Could Achieve

This piece originally appeared in 38 North on April 16, 2018. View it here. A Third Way? In a report published last January in 38 North, “Unpacking a US Decision to Use Force Against North Korea: Issues, Options, and Consequences,” Robert Jervis assesses the efficacy of using force against North Korea. Jervis cautions against assuming that superior US military and economic capabilities guarantee success in denuclearizing the North. He also underscores the uncertainties attend

Iran Among the Ruins: Tehran’s Advantage in a Turbulent Middle East

Over the last seven years, social upheavals and civil wars have torn apart the political order that had defined the Middle East ever since World War I. Once solid autocracies have fallen by the wayside, their state institutions battered and broken, and their national borders compromised. Syria and Yemen have descended into bloody civil wars worsened by foreign military interventions. A terrorist group, the Islamic State (also known as ISIS), seized vast areas of Iraq and Syri

This piece was originally published on September 28, 2017 and is republished with the permission of War on the Rocks. It was informed in part by the Johns Hopkins SAIS-Peking University (PKU) Dialogue, which was made possible by the Betty Lou Hummel Endowment Seed Grant for Collaborative Research on Foreign Policy, awarded to SAIS professors Daniel Markey and Joshua White. The seed grant was established to foster collaborative research involving two or more SAIS faculty from

From the ‘Problem from Hell’ to ‘Hell on Earth’: Bosnia, Syria and the Failure of the Responsibility

A year ago yesterday, a chemical attack on sleeping families in the Syrian town of Khan Shaykhun killed 72 civilians and left 550 wounded. Today is the 26th anniversary of the beginning of the siege of Sarajevo—the longest and the most brutal conflict in European post-World War II history. Tomorrow, one year will have passed since the United States carried out one-off airstrikes on the Shayrat air base in Syria, from which the chemical attack had been launched two days earlie

“Witness: Aleppo Sights, Sounds & Stories from Pre-War Syria,” was a panel discussion and exhibition of Syrian music and photography, hosted at the Johns Hopkins University School of Advanced International Studies (SAIS). The program included a panel discussion about pre-war Syria, featuring a performance of Syrian music, and was followed by a reception and exhibition of 56 photographs by Jason Hamacher of Lost Origin Productions. Hamacher gained unprecedented access to the c