Carla Freeman is Director of the Foreign Policy Institute at the Johns Hopkins School of Advanced International Studies (SAIS) where she is concurrently Associate Research Professor in the China Studies program. A second generation “China hand,” she has lived between the United States and Asia throughout her life. A specialist in Chinese international and domestic policy, including environmental and regional policy, she has advised corporations and government agencies.

Before coming to Johns Hopkins SAIS, she served as Program Officer for civil society and community development with an emphasis on sustainability at The Johnson Foundation. She was a political risk consultant with an Asia-wide portfolio that included China, Korea, Japan, Taiwan, and Vietnam. She had several appointments early in her academic career, including directing the Global Studies and International Affairs program at Alverno College and being a visiting scholar at the University of Wisconsin-Milwaukee, in addition to academic positions at the University of Wisconsin-Parkside and Beloit College. She was also a Peace Scholar with the United States Institute of Peace and, most recently, was a visiting fellow at the Chinese Academy of Social Sciences and a visiting scholar at Harvard University’s Fairbank Center.

She completed her B.A. in Southeast Asia and History at Yale University, a certificate in Chinese language studies at Beijing Foreign Languages University, a certificate in political science from Sciences Po in Paris, and certificates in Chinese from Beijing Foreign Languages University and the Taipei Language Institute. She received her M.A. and Ph.D. from Johns Hopkins SAIS, writing her dissertation on the political economy of reform in China and the challenges posed to its heavily industrialized Northeast region.

Current projects include a book with the working title, China and the Global Commons, and edited volumes on China and developing countries, China's international relations, and Chinese perspectives on North Korea. Recent publications include a collaborative study of China's carbon market development and several pieces on China's international relations. She also serves as editor-in-chief of Asia Perspective.

Asian Perspective applies an Asian lens to world and comparative politics. With its vital contemporary focus, it probes the regional, international, and transnational issues that affect Asia today. Asian Perspective is peer-reviewed and publishes quarterly. It is produced with the Institute for Far Eastern Studies at Kyungnam University. Now in its fourth decade, the journal welcomes interdisciplinary research and is committed to promoting a lively exchange of ideas between scholars and policymakers. 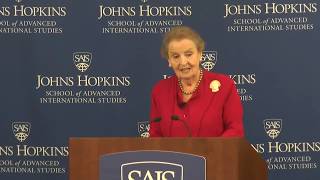 The Legacy of Zbigniew Brzezinski: Remarks by Madeleine Albright

"Us vs. Them: The Failure of Globalism" with Ian Bremmer

China's Relations with the Korean Peninsula

Unpacking a US Decision to Engage North Korea: What it Entails and What it Could Achieve

New strategies for an old rivalry? China–Russia relations in Central Asia after the energy boom 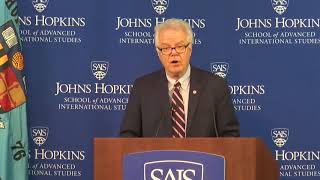 US-China Relations in the Era of Trump and Xi Jinping

Manipulating Religion for Political Gain in Pakistan: Consequences for the U.S. and the Region

Promoting Sustainable Usage of the Oceans—Security, Collaboration and Development

China and North Korea: Strategic and Policy Perspectives from a Changing China

China taking climate action through the market at home