Dr. Daniel S. Hamilton is a Senior Fellow at the SAIS Foreign Policy Institute and a non-resident Senior Fellow at the Brookings Institution. At SAIS, he leads a project exploring the new dynamics of the Atlantic Basin. He served previously as the Austrian Marshall Plan Foundation Professor (2012-2019); Richard von Weizsäcker Professor (2002-2011); Founding Director of the School’s Center for Transatlan

tic Relations (2001-2019) and Executive Director of the American Consortium for EU Studies (2002-2017), designated by the European Commission as the EU Center of Excellence Washington, D.C.

During the 2020-21 academic year Dr. Hamilton directed the Global Europe Program at the Woodrow Wilson International Center for Scholars. He has also served as a Senior Associate at the Carnegie Endowment for International Peace and Deputy Director of the Aspen Institute Berlin. He currently serves as President of the Transatlantic Leadership Network, as Richard von Weizsäcker Fellow at the Robert Bosch Academy in Berlin, as Advisory Board member of the Austrian Institute for International Affairs, and as a member of the editorial advisory boards of Riddle and the Review of Central and East European Law.

He has held a variety of senior positions in the U.S. Department of State, including Deputy Assistant Secretary for European Affairs, responsible for NATO, OSCE and transatlantic security issues, Nordic-Baltic and Balkan Affairs; U.S. Special Coordinator for Southeast European Stabilization; Associate Director of the Policy Planning Staff for two U.S. Secretaries of State; Director for Policy in the Bureau of European Affairs; and Senior Policy Advisor to the U.S. Ambassador and U.S. Embassy in Germany. He also led international policy work for the Johns Hopkins-led National Center for the Study of Preparedness and Catastrophic Event Response (PACER), named as one of five U.S. National Centers of Excellence by the U.S. Department of Homeland Security.  In 2008, Hamilton served as the first Robert Bosch Foundation Senior Diplomatic Fellow in the German Foreign Office, where he worked in the Planning Staff for Foreign Minister Frank-Walter Steinmeier. In 2012 he was a member of German Chancellor Angela Merkel’s ‘Futures Advisory Group’.

Hamilton has been a Member of the Academic Advisory Boards for the Stiftung Wissenschaft und Politik (SWP), the Körber Foundation, the Alexander von Humboldt Foundation, and the Heinrich Böll Foundation. He has served as a consultant to Microsoft, the U.S. Business Roundtable, the Transatlantic Business Dialogue, the National Geographic Society, and RAND. He testifies regularly before the U.S. Congress and European parliaments, and is a regular commentator for European and U.S. media.

Hamilton has been presented with Germany’s Cross of the Federal Order of Merit (Bundesverdienstkreuz); France’s Knighthood of the Ordre des Palmes Académiques; Poland’s Officer’s Cross of the Order of Merit; Sweden’s Knighthood of the Royal Order of the Polar Star; the Transatlantic Business Award from the American Chamber of Commerce to the European Union, and the Transatlantic Leadership Award from the European-American Business Council. He holds the State Department’s Superior Honor Award. He is a member of the Council on Foreign Relations and the American Council on Germany.

Hamilton has a Ph.D. and M.A. with distinction from Johns Hopkins SAIS and an honorary doctorate from Concordia College. He received his undergraduate degree from Georgetown University’s School of Foreign Service. He has authored over 100 books and articles on contemporary European, transatlantic and international affairs. 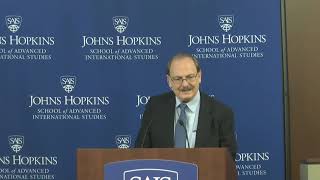 Creating the North Atlantic Marketplace for Jobs and Growth