Hafed Al Ghwell is a non-resident Senior Fellow at the Foreign Policy Institute (FPI) of the Johns Hopkins University School of Advanced International Studies (SAIS). He is also a Senior Advisor at Maxwell Stamp Inc., the international economic consultancy firm, where he specializes in the Middle East and North Africa political economy issues and leads the global strategic communications practice. He is also a Senior Advisor with Oxford Analytica, the global risk consultancy. Al Ghwell also serves as a member of the Strategic Advisory Solutions International Group (SASI); a group of distinguished former U.S. Ambassadors, senior U.S. Military Officers, and Business Executives. He is also a Columnist with Arab News, the oldest English language daily in the Arab world and was until March 2015 a Non-Resident Senior Fellow at the Atlantic Council’s Hariri Center for the Middle East in Washington, D.C.

Al Ghwell was also Director of External Affairs and Communication at the Dubai School of Government, and part of the senior management team, from 2007 to 2009. He joined the Dubai School of Government, a partnership with the Harvard Kennedy School of government for the Arab World and now known as Mohamed Bin Rashid School of Government, on a secondment from his position as the Head of the Global network of Public Diplomacy, Information, and Communication Centers for the World Bank. Prior to that, Al Ghwell served as a Principle Associate at Foreign Reports, the venerable advisory group on the politics of oil in Washington, DC.  Al Ghwell also served as a junior economist at the IMF before joining Foreign Reports.

Al Ghwell is a veteran commentator on the political economy of the Middle East and North Africa. His analyses are widely published in international media, including ABC News, BBC, DW, Al-Jazeera English and Arabic Channels, NPR, PBS Front Line and News Hour, Financial Times, Wall Street Journal, Washington Times, UPI, Newsweek, the National Newspaper, Gulf News, and the Washington Diplomat, among many others.

Challenges 2019 will bring for the Arab world

Results of US midterm elections bring hope for inclusive politics 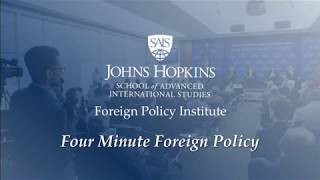 The light has dimmed in Tunisia’s shining beacon

Why the Arab world must prepare now for recession

Why big cities are the future of the Arab world

Gulf states can teach the Arab world about brain gain

Without the UN, our world would be an even more dangerous place